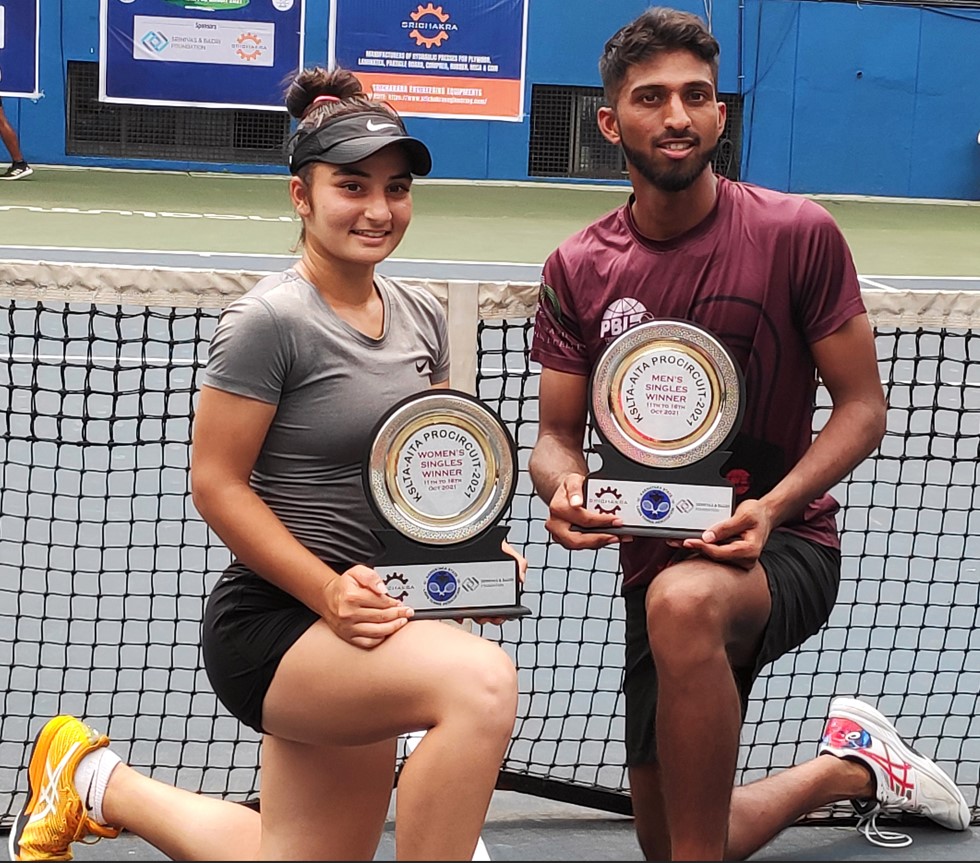 Rishi Reddy and Vanshita Pathania captured the Men’s and Women’s title respectively in the Rs 2-lakh prize money KSLTA-AITA Pro Circuit 2021. In what seemed to be a confidence-building victory for both of them before the Fenesta Nationals next week, Rishi trounced the top seed Ishaque Eqbal of West Bengal 6-0, 6-2 while Vanshita continued her fine form to outclass third seed Avishka Gupta of Telanaga 6-0, 6-1 in the finals played at the KSLTA Stadium, Bengaluru on Saturday.

Rishi who had lost to Ishaque in both their earlier encounters seemed to have done his homework today. The 23-year-old moved faster, served and returned better. This unsettled his opponent who committed a series of unforced errors. Taking advantage of the slow-paced court which helped his style of play, Rishi took the set at love. Continuing in the same vein and egged on by his academy compatriots, he raced to a 5-1 lead. The top seed saved two match points before winning the longest game of the match. Rishi then served out for the match for his fifth career title in the men’s category.

“I am glad to have played some of my best tennis in this tournament. I dedicate the win to my coach Jorge Pinilla who came to watch me play despite being unwell,” said Rishi who is doing his undergraduate program in BBA. “I hope to play well in the Nationals and the upcoming ITFs,” he said.

Meanwhile, Vanshita who is on a comeback trail after being out of the action for the last two years was in complete control of her match today. The 19-year-old Vanshita who had beaten her opponent in their earlier meeting proceeded with her game plan of keeping the ball in play and occasionally charged the net which fetched her good results. Taking an early lead, the psychology student blanked her rival in the first set but faced some resistance in the second, especially in the fifth and sixth game before she recomposed herself to grab the match.

“I am thrilled to be back in action after two years. Although I had a bit of success in doubles, this win feels just great. I dedicate my win to my father who has been my backbone,” said the champion.