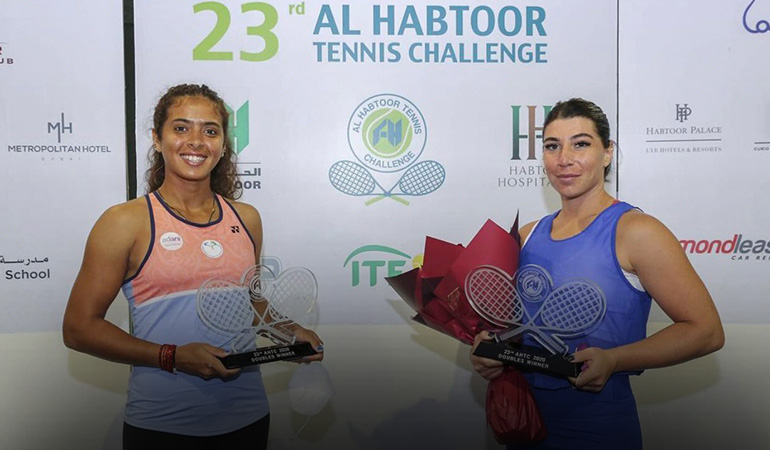 December 14, 2020 By aitatennis No comments yet

Top Indian tennis player Ankita Raina won her third doubles title of the pandemic-hit 2020 season, clinching the Al Habtoor challenge with Ekaterine Gorgodze. The unseeded Indo-Georgian pair won 6-4 3-6 10-6 against Aliona Bolsova Zadoinov from Spain and Slovakian Kaja Juvan in the final of the USD 100,000 hard court event on Saturday.Ankita said success on the singles circuit is unparalleled but a deep run in doubles draw is not without significance.

It was the fourth doubles final of the season for Ankita but the biggest trophy of the calender since her earlier two titles were at the USD 25,000 level.In February this year, Ankita had made three finals, winning back-to-back titles in Nonthaburi (Thailand) with Bibiane Schoofs and ending runners-up in Jodhpur with compatriot Snehal Mane.The 27-year-old said returning to the circuit after a long break too was relieving.

“It’s really good that I am able to travel again. I was doing a bit of training, both physical and mental at home and it was different coming back to tour. Europe had already opened up and their players already had two months of match sharpness behind them.

“Most of the matches were on clay at that time and I had never played so many back-to-back clay court matches. It was a good learning curve.”During the last three months, Ankita also got exposure of playing on the US circuit.

”I have mostly played on hard courts and this time I got to play a lot in the US. Thankfully I had my coach Hemant Bendre’s friend Shirish Deshpande to help me out. He has been there for long as a coach.

“It was good to have someone watching your matches and giving feedback.”