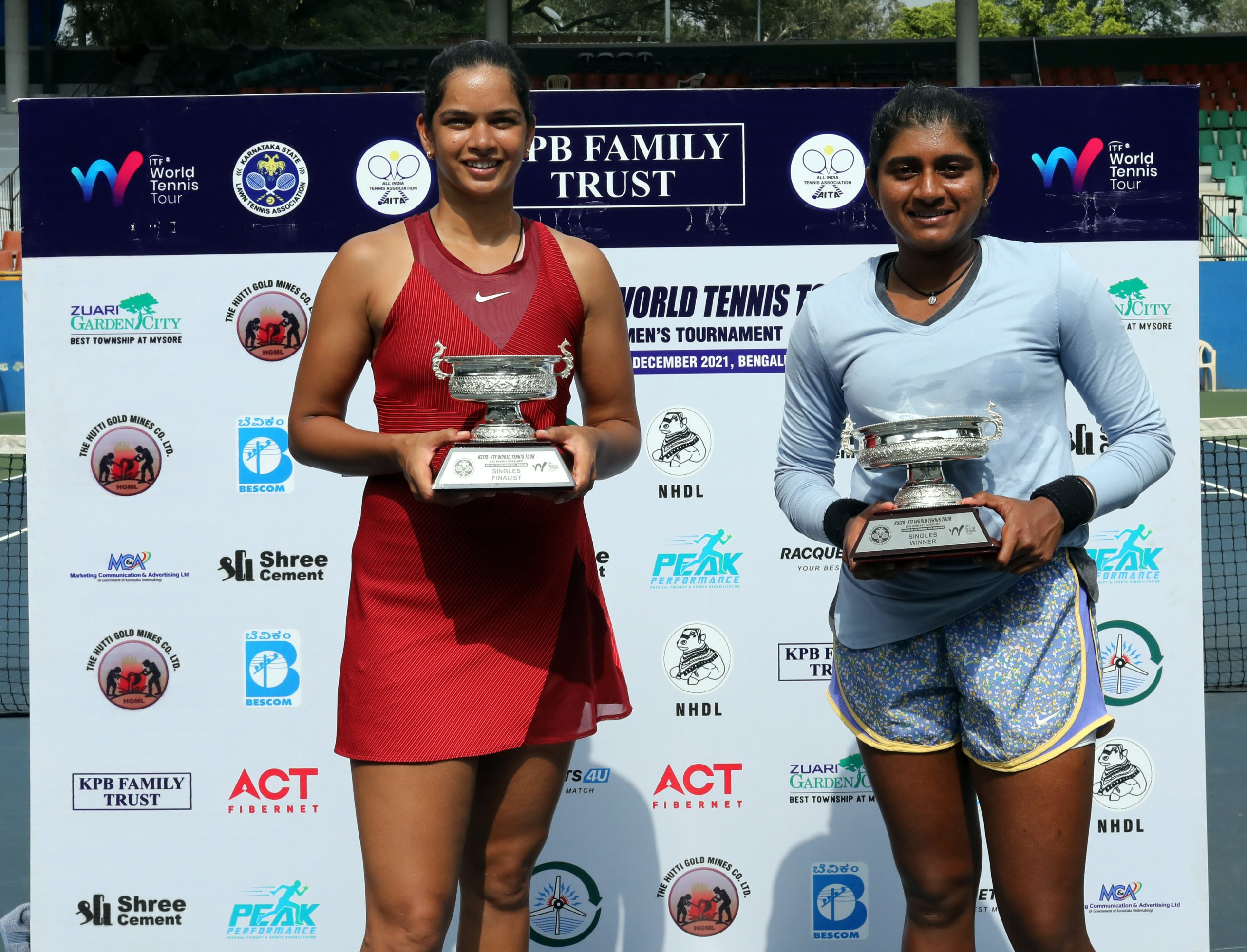 Pranjala Yadlapalli, who, after having played two back to back three setters in her quarterfinal and semifinal matches and suffering cramps, dreaded yet another three setter in the title clash against statemate Sowjanya Bhavisetti. Perhaps she had planned accordingly as after being 3-5 down in the first set, went all out to claim the set 7-5 and breezed through the second after initial hiccups to wear the ITF Women’s $15,000 Bengaluru crown at the KSLTA Stadium here in Bengaluru on Sunday. This is Pranjala’s fourth title of her ITF Pro Circuit career.

Battling with a nagging shoulder injury that saw her out of the action for almost two years, the 22-year-old had last won the ITF Lagos title three seasons ago. “I am thankful to be playing again and making my comeback with a victory feels great,” said the champion as she pocketed the winner’s cheque of US$ 2,352 and more importantly 10 world ranking points that will help her to move up the ranking list.

The finals began on a fiery note with both the players testing each other’s corners. Sowjanya, with a renewed confidence of having felled the top seed Rutuja Bhosale yesterday, was in an attacking mode but at times, it proved to be her disadvantage.  Pranjala with an alarming calmness, was careful of her serving shoulder and trusted more on her backhand. After both the players had broken each other’s serve twice in first four games, Pranjala held hers to go 3-2 up. But her opponent won the next three games to lead 5-3. Serving to survive in the set, Pranjala came up with some great down the line backhand shots and a few unforced errors by Sowjanya helped her win four games in a row and wrest the first set.

The second set saw both the players going for broke and held their respective serves until the fourth game. Pranjala then took control of the match as she played some quality tennis and egged on by her fellow trainees from the Rohan Bopanna Tennis Academy who were present in large numbers, she didn’t give a fumbling Sowjanya any chance of a comeback and won four games on a trot to wear the singles crown.

“When I was 3-5 down, I thought I should give my best and try to win in two sets as she is a good player and could have made a comeback anytime. I was taking it easy and putting the ball on the court and going for big shots when I felt confident,” said Pranjala.

“I dedicate this success to my grandfather who passed away due to Covid-19 and many others who lost their loved ones due to the Pandemic,” said an emotional Sowjanya who, apart from being the runner-up in the singles, had won the doubles title yesterday. She also urged the people to be safe rather than be sorry.