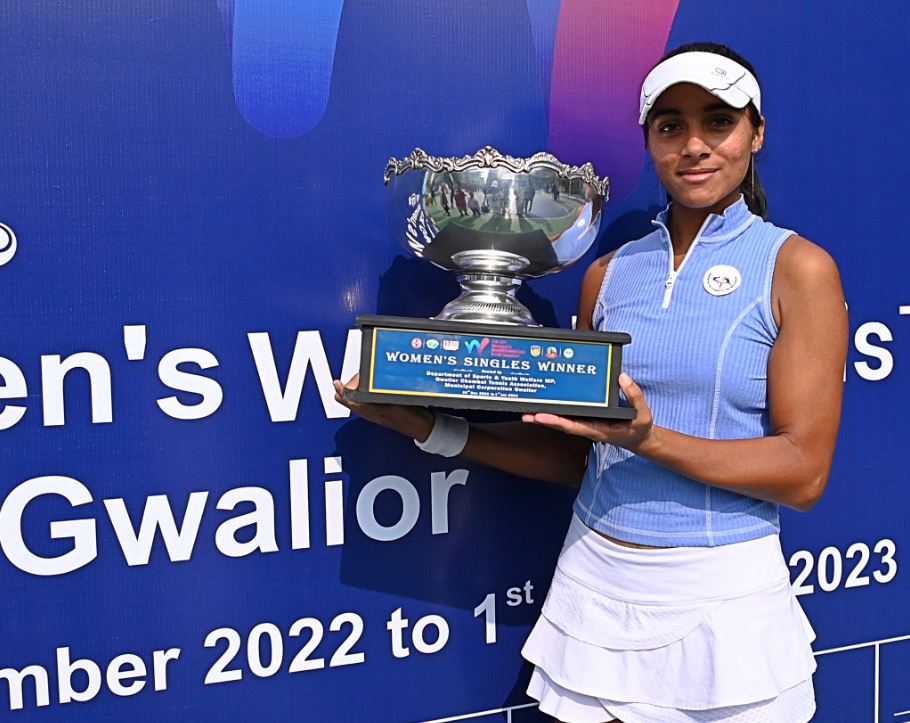 Second seed Vaidehi Chaudhari was at her fighting best as she beat the top seed Ksenia Laskutova 7-5, 6-4 to clinch the title in the $15,000 ITF women’s tennis tournament at the City Centre Tennis Complex in Gwalior on Sunday.

Watched by an appreciative audience which came alive as the match hotted up, Vaidehi bounced back from 1-4 down and facing set-points at 3-5 to make it a straight forward affair.

It was her maiden singles title on the professional circuit for Vaidehi, who had won her maiden doubles title on Saturday with Laskutova as her partner.

Quite appreciative, the 26-year-old Laskutova put things in perspective at the presentation ceremony, as she called Vaidehi, “my doubles partner, opponent and friend”, despite being hurt at the loss after having played so well.

After winning the National women’s title in October, the 22-year-old Vaidehi has really stepped up her game. She was quite relaxed as the match progressed and sported a commendable degree of concentration, playing sensibly to the demands of the situation to exasperate the wiry Russian.

“I am very happy to win a double crown here”, said Vaidehi, even as she quickly acknowledged the splendid role of her long-time coach Jignesh Rawal and parents.

“I had lost a few singles and doubles finals earlier. I was confident coming into this tournament and determined to do my best. I am happy with the way I played the final, particularly with my return of serve. At 2-5, I stopped worrying about winning or losing, and tried to play solid on every point. That was the biggest gain from this match. In the second set, when it was going up and down, I managed to stay calm and play strong”, said Vaidehi.

Vaidehi converted five of 11 break points in the match, while Laskutova managed to capitalise on three of eight break points that she forced. The Russian tended to get flustered at her mistakes and that did not help her cause.