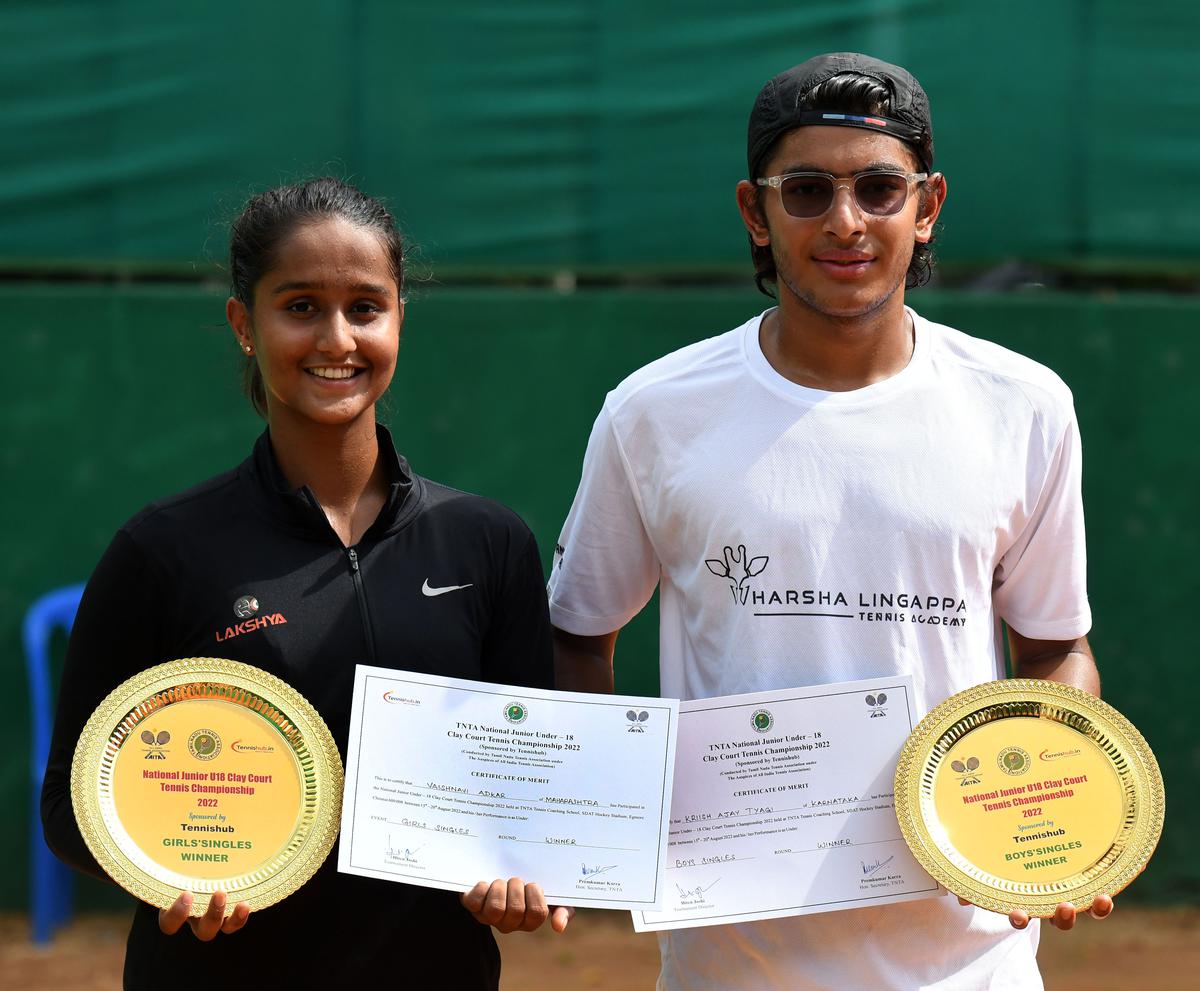 Kriish Tyagi and Vaishnavi Adkar both defeated the top seeds to clinch the singles titles at the 29th National Junior U-18 Clay Court Championship at the SDAT Stadium in Egmore, Chennai on Saturday.

For the 15-year-old Kriish, the victory completed a unique treble of the U-14, U-16 and U-18 national titles within the space of a year and a half.

The sixth seed from Karnataka, who trains at the Harsha Lingappa Tennis Academy in Bengaluru, was up against top seed Denim Yadav of Madhya Pradesh in the final. Denim, who had won the doubles title on his 18th birthday on Friday, began strongly and dictated the initial rallies. An attempted forehand down the line from Kriish went long, handing Denim the early break at 3-1 which he eventually held on to and took the first set 6-3.

Kriish began the second set with much more aggression. A love hold for the Bengaluru boy was followed by a crucial break of serve after a long deuce game in which Denim failed to convert any of his two game points.

Denim responded by breaking Kriish’s serve immediately but the effects of playing multiple matches daily in the last few days could be observed as he already had very little left in the tank. Kriish reeled off the next four games, featuring some stunning forehand returns landing bang on the baseline, to win the second set 6-1 and level things up.

Things did not improve for Denim in the final set. After being 30-0 up on his serve in the first game, he sent an easy forehand volley wide, a cross-court backhand wide and overcooked a backhand down the line before hitting a double fault to hand Kriish the advantage. Krish duly consolidated the break despite a failed underarm serve attempted at 40-0.

At deuce on Denim’s serve in the third game, Kriish probably executed the final blow. Mid-rally, the ball shot up unexpectedly post Denim’s return but Kriish adjusted his body position, got on top of the ball and managed to send the return before finishing the point with an inside-out forehand.

Denim finally stopped Kriish’s run of winning eight consecutive games at 4-0 but it was too late as the sixth seed comfortably served for the match and the title at 5-2.

Kriish had taken a nasty fall trying to hit a return on game point on Denim’s serve in the first game of the first set. In the end, he was the one who had risen to the occasion.

Girls’ Singles Final
The summit clash between Suhitha Maruri of Karnataka, the top seed, and Vaishnavi Adkar of Maharashtra, the second seed, had a topsy-turvy beginning as there were four break of serves in the first six games.

However, once the 17-year-old Vaishnavi settled in, she beat her younger opponent – 15-year-old Suhitha – in the range of shots as well as movement on the court. The eighth game turned out to be decisive as Suhitha could not hold serve despite four game points and eventually got broken. Vaishnavi followed it up with a love hold to lead 6-3.

The second set had a similar script. After not winning a single point on her serve in the opening game, Suhitha had several break point opportunities in the very next game. Vaishnavi, though, was relentless and soon went up by a double break at 4-1.

The final service game by Suhitha summed up her match as she started with two double faults and at 15-40, sent a cross-court backhand return wide.

This is Vaishnavi’s first age-group national title in singles. “It is actually a big victory for her and will help in boosting her confidence for the future tournaments,” said Aniket Wakankar, Vaishnavi’s coach. The 17-year-old trains at the Bounce Tennis Academy in Pune.

For Vaishnavi, the win in singles comes after a heartbreaking loss, along with her younger sister Asmi, in the doubles final on Friday. “This was my first tournament with my sister and I think we did pretty well. It was a very close match and could have gone either way,” she said.