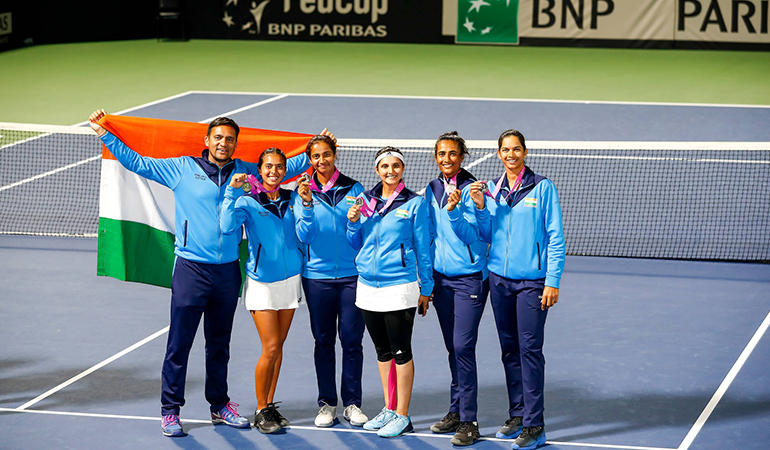 December 18, 2020 By aitatennis No comments yet

• The move provides increased certainty for players, teams and host nations competing in the World Cup of Tennis
• Eight home-and-away Play-off ties to be held during the 2021 Finals week: 13-18 April 2021
• Up to 140 top players from 28 nations will contest ties held in nine countries in the same week

The ITF has announced that the Billie Jean King Cup by BNP Paribas Play-Off ties, initially scheduled for 5-6 February 2021, will move to 16-17 April 2021 as the tennis calendar continues to be impacted by the pandemic. Latvia and India were scheduled to face each other for the first time in Billie Jean King Cup’s history at Latvia on the originally scheduled dates.
The calendar, however, is subject to continued assessments relating to health and safety, international travel policies and governmental approval of sporting events.

Eight two-day home-and-away Play-Off ties will now take place during the week of the Finals, which will be held from 13-18 April 2021.

The decision provides increased certainty for competing teams and has been made by the ITF Billie Jean King Cup Committee in consultation with the WTA.

The Play-Off ties will take place in eight different cities around the world whilst the Billie Jean King Cup Finals 2021 will be hosted in Budapest, Hungary, for the first time. Up to 140 of the top players from 28 nations will be in action across nine countries during an exceptional week of international team tennis culminating with the crowning of the 2021 world champions.

Katrina Adams, Billie Jean King Cup Committee Chair, said: “We are looking forward to what will be a fantastic week of international team tennis, showcasing the best of the Billie Jean King Cup competition. We would like to thank all of the national associations, hosts, captains and players involved for their understanding and flexibility as we continue to respond to the challenges posed by the pandemic.”

All events will be subject to strict health and safety guidelines.