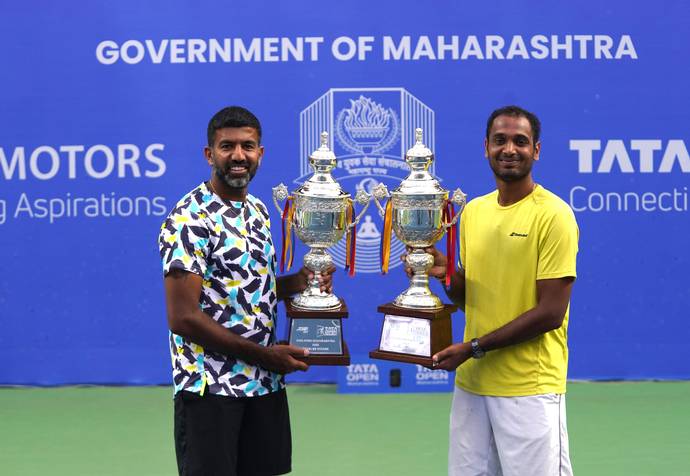 India’s Rohan Bopanna and Ramkumar Ramanathan won their second ATP World Tour title together after pipping the top-seeded Australian pair of Luke Saville and John-Patrick Smith in the final of the Tata Open Maharashtra in Pune on Sunday.

Bopanna and Ramkumar combined as a team on the ATP Tour for the first time at the Adelaide event last month in the run-up to the Australian Open and won the trophy.

For Bopanna, it was his 21st ATP doubles title while for Ramkumar it was the second trophy at this level and it will push him inside the doubles top-100 for the first time in his career.

They split USD 16370 as prize money and earned 250 ranking points each.

Bopanna had won this event with compatriot Divij Sharan in 2019.

Still going strong at an age of 41, Bopanna said it’s his years of playing experience that is helping him out in the circuit.

What an incredible start to the year for @rohanbopanna and @ramkumar1994 🙌

“A lot is to do with experience, which you really bring in, years and years of experience and the biggest thing is my body is feeling very very good at the moment,” Bopanna said after the match.

“I did a lot of yoga which has helped me tremendously and I am very thankful to my Yoga Teacher (Mohan) in Bangalore who has made such a difference for me and I can try something new at this age.

“It has made a difference and that really shows as long as I am playing matches, competing, and doing something that is physically appealing. Maybe at the practice court, I may not be giving my 100% but as long as I am feeling good and go out there and enjoying the pace as currently right now.”

Asked to compare the two titles that they have won together, Bopanna said performing before the home crowd was tough while in Adelaide no one watched them.

“Both are extremely special but anytime you win a title at home it’s a lot more pressure. In Adelaide, no one was really watching, but here there were a lot more expectations, and especially coming here with a win people expected an automatic win which wasn’t easy but at that tie break the crowd really helped.

“You just get that extra boost, that extra energy. Even if your legs are feeling tired that’s the energy you need to hit the services especially for me. Winning in India is always special and especially with an Indian partner is truly great.”

Ramkumar said he now wants to play ATP 500 event in Dubai and for that will try to do well in the upcoming two Challengers in Bengaluru.

“Let’s see if there is a chance to get in Dubai and hope I can play that,” said the 27-year-old.

Ramkumar said everyone believed in his game and that gave him confidence in this tournament.

“Coming from Bops (Bopanna) who always believes in me, my coaches, and everyone who has always believed in me and said you play well and that just keeps me going.

“I just have to work on a few things on the court and just keep competing at this level as much as I can which will improve my game and automatically the ranking,” he said.

Big serves marked the beginning of the contest with only Ramkumar and Luke losing a point each in the first four games.

Bopanna’s volley error on a return from Luke made it 30-all in the fifth game but Ramkumar pulled off an ace and followed that up with another huge serve to hold for a 3-2 lead.

The Indian team had got a chance to break Patrick-Smith’s serve in the next game when Luke made an error while attempting an overhead volley at 40-30 but the opportunity could not be utilized as the Australian pulled off a big serve on the deuce point.

The Australians also created a breakpoint opportunity on Ramkumar’s serve in the ninth game when they found two service return winners and the Indian serving a double fault at 40-30 but the home team managed to hold.

A comfortable hold at love by Patrick-Smith made it 5-5.

Eventually, a tie-break was required for deciding the first set. Both the teams had a number of set points as the Indians squandered two chances and the Australians three before converting their fourth.

They got the chance when Bopanna made an unforced error at 10-all and Ramkumar netted a forehand on set point.

In the second set, the Indian duo needed a good start and they got it by breaking Luke’s serve in the third game when the Australian made a volley error on deuce point.

Bopanna saved a break chance on his serve in the next game to keep their nose ahead. Patrick-Smith was serving to stay in the set in the ninth game and was broken to allow the Indian team to force a Super Tie-Breaker.

At 30-all, an engrossing rally ensued between the two pairs. Luke blinked to give Indian first set point which they converted when Bopanna dispatched a volley winner with ease.

Bopanna and Ramkumar dominated the Super Tiebreak to secure the title.