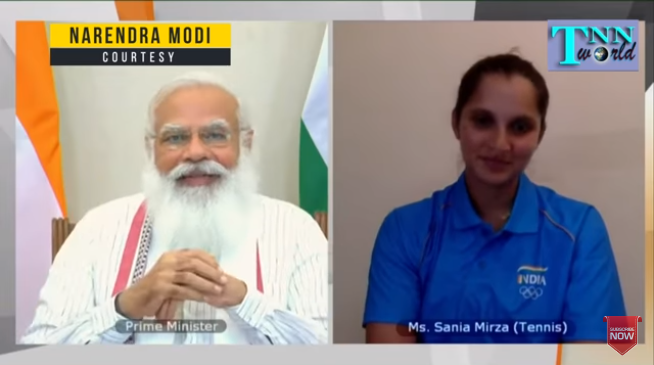 Speaking to Indian tennis star Sania Mirza, who will become a four-time Olympian at the Tokyo Summer Games, PM Modi began with a query on how to become a tennis champion.

Sania, the winner of six Grand Slam titles and a former world number one player, explained how a global sport like Tennis has expanded to many tiers 2 and tier 3 cities, as compared to the times when she started playing tennis as a kid. She further added that there are many upcoming talents who now believe that achieving big and becoming a tennis champion on a global stage is now possible.

PM Modi also asked her about her training and preparations for the upcoming Games.

“Ankita is younger and she is playing very well in the recent past. I am very excited to play with her. We played at the Fed Cup together last year and we did put up a great showing for the nation. We are looking forward to going to the Olympics. It will be my fourth and her debut at the Olympics. I think she can provide me support with younger pair of legs, at this stage of my career,” said Sania Mirza.

PM Modi concluded the interaction with Sania with a good luck message, “Sania, you are a champion as well as a fighter. I am hoping that at this edition of the Games, you will emerge as more successful and a shining star for Indian tennis. I wish you the very best!”