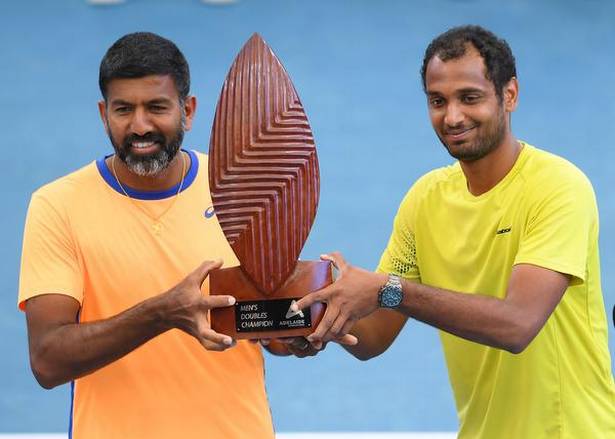 Surprise top seeds Dodig and Melo in the final

The unseeded pair of Rohan Bopanna and Ramkumar Ramanathan beat the top seeds, Ivan Dodig and Marcelo Melo 7-6(6), 6-1 in the doubles final of the $521,000 ATP tennis tournament here on Sunday.

It was the first professional tournament together as a pair for Bopanna and Ramkumar, who had partnered with each other in the last Davis Cup tie against Finland.

In five matches, the Indian pair dropped one set and did not drop even one service game, to collect the winner’s share of 250 ATP points and $18,700.

While it was the maiden Tour title for Ramkumar, it was the 21st Tour doubles title for the former World No. 3 Bopanna, ranked 41 now. It was only the fourth doubles title with an Indian partner for Bopanna after the ones with Mahesh Bhupathi and Divij Sharan.

“Amazing feeling to win my first ATP title with Bopsy! A great week ended on a high note. Always lived for these moments and thankful to Almighty for all the blessings,” said Ramkumar.

Interestingly, it was a chance pairing as Bopanna was scheduled to play with Edouard Roger-Vasselin, who subsequently got into the ATP Cup in Sydney. Since both were on the same flight from Dubai, Bopanna asked Ramkumar to travel to Adelaide for the doubles, as the latter was only scheduled to train in advance for the Australian Open qualifying event.

“I think it worked well for both of us. He got into the singles here as well. He got five doubles matches. Couldn’t have asked for a better week for both of us,” said Bopanna.

Bopanna has watched Ramkumar grow in the professional circuit and has guided him at every opportunity.

“I have seen Ram grow as a player. He has got tremendous potential. His serve is his biggest weapon. Every time I play with somebody serving that big makes it easy for me at the net. I really felt Ram’s serve today in my ear. So I know how hard it comes through,” said Bopanna.

Ramkumar has grown in stature as the current India No. 1 and has newfound confidence as part of his arsenal. “I think what has changed is the belief in himself. That has really changed from last year. Ram was playing some good tennis by the end of the season. He is serving well, volleying well. Now, he is starting to believe he can do well at tournaments. It is just a matter of time for him to string a few matches together and break back into the top-150, 100,” observed Bopanna.

“I would love to play more with Bops, whenever we can,” said Ramkumar, who would focus on the Australian Open singles qualifying event from Monday in Melbourne.