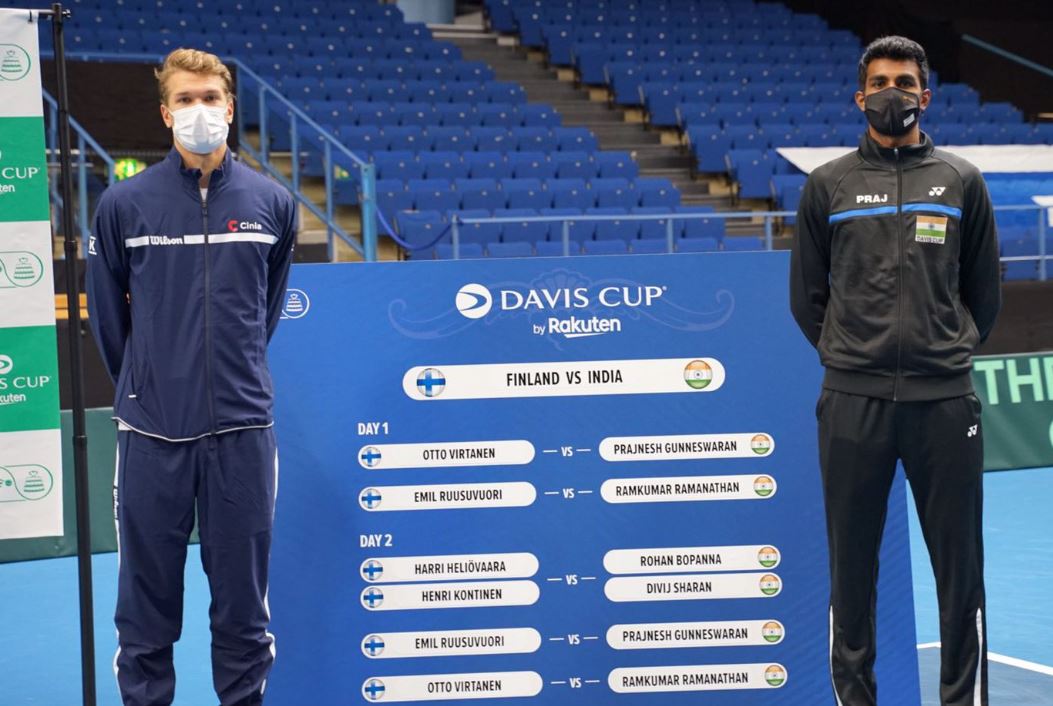 India’s top-ranked player Prajnesh Gunnerswaran will be taking on Otto Virtanen, Finland’s No. 2 singles player who is ranked 419, in the first match of their Davis Cup World Group I 1st round match at Espoo Metro Areena here on Friday.

Ramkumar Ramanathan, India’s No. 2 player ranked 187 in the world, will meet Finland’s top player Emil Ruusuvuori, the World No. 74, in the second match on the opening day of the two-day encounter.

The Indian doubles pair of Rohan Bopanna and Divij Sharan will take on the Finnish pair of Harri Heliovaara and his partner Henri Kontinen in the first match on Saturday which will be followed by the reverse singles.

India’s non-playing captain Rohit Rajpal was happy with the fact that his top singles player will be leading the campaign in the tie.

“The draw was as I was expecting. We are happy that our No 1 Prajnesh comes out first and if he performs to his potential then God willing, we should go up 1-0, and then the pressure will be on their No 1, who will play Ramkumar,” said Rajpal.

He said Ramkumar had good chances of putting it across Ruusuvuori, despite the disparity in rankings. “Ram is a very versatile player. We are preparing him well for this match and I have high hopes for him. I am hoping he will do the job for India,” said Rajpal.

Considering the way the draw has shaped up, Rajpal said the doubles match on Saturday will be very crucial.

“Doubles will be very crucial for both teams. If you are 2-0 up, the feeling is different. But if you are 1-1, then both the teams will be focussed on the doubles.” he said. If things go as per rankings, there is a good possibility that the score will be 1-1 at the end of the first day.

India coach Zeeshan Ali said the draw is in India’s favour. “Draw worked in our favour, I was hoping that Prajnesh will play the first match and that’s what happened,” he said.