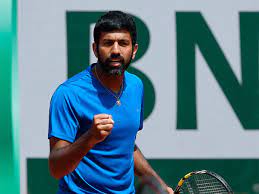 Veteran Indian tennis player Rohan Bopanna and his Croatian partner Franko Skugor advanced to the pre-quarterfinals of the French Open with a straight set win over Americans Frances Tiafo and Nicholas Monroe on Thursday.

The unseeded Bopanna and Skugor prevailed 6-4, 7-5 in the second round match that lasted one hour and 20 minutes.

The 41-year-old Bopanna, ranked 40 in the world, is not defending any points this year at the Roland Garros. He needs to earn points since the this is his last chance to improve his ranking. The rankings on June 10 will be considered for entry into the Tokyo Olympics.

Divij Sharan, though, lost his chance by losing his first-round match.

The combined rankings of Bopanna and Sharan will be taken into account for entries.